Originally, the 49ers thought Trey Lance might end up missing all of 2022, but a recent diagnosis on his ankle injury suggests he might be back sooner.

During his press conference in the immediate aftermath of the San Francisco 49ers’ Week 2 victory over the Seattle Seahawks, head coach Kyle Shanahan told reporters that quarterback Trey Lance had indeed suffered a season-ending ankle injury.

Lance, of course, suffered the injury after attempting a 2-yard rush where two Hawks defenders fell on top of him, which ultimately required the second-year signal-caller to be carted off the field.

However, Shanahan wasn’t totally aware of the nature of the injury, which required surgery the following Monday. And, according to a report from NFL Network’s Tom Pelissero, the ankle injury wasn’t quite as severe as it possibly could have been:

#49ers QB Trey Lance is undergoing surgery this morning for his fractured and dislocated ankle, per source.

One small bit of good news: My understanding is not a compound fracture like Dak Prescott’s. But still a season-ending injury.

Pelissero did conclude the injury was of the season-ending variety, however.

But a follow-up bit of medical analysis suggests otherwise.

There’s a long way to go before Lance comes close to seeing the field again. Even in the wake of his successful medical procedure, there’ll be countless days of rehabilitation and strengthening before he can put the injured ankle back to full use.

However, as initially reported by the San Francisco Chronicle’s Eric Branch (h/t 49ers Webzone), foot and ankle surgeon Dr. Kenneth Jung feels as if the recovery period might be a lot shorter than originally anticipated.

Working as a consultant to the Los Angeles Rams, Jung told Branch the following:

There could be a lot of non-medical factors that are playing a part in shutting him down — protecting their investment in the future. 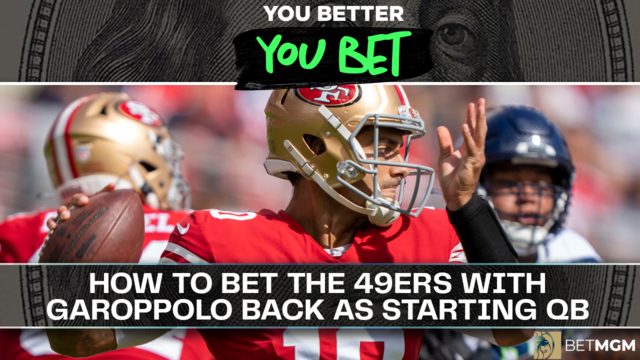 Jung speculated on how both Lance’s fibula and ligaments were repaired during the surgery, and the physician also admitted the Niners may still hesitate to rush the quarterback into the fray if he’s ready to go.

If they did, however, Lance could feasibly be healthy enough to play as early as Week 13’s game against the Miami Dolphins.

On Tuesday, Shanahan shot down the notion Lance might return earlier than expected, telling reporters, “he’ll be out until next [season].”

Whether or not Shanahan sticks to that conclusion is yet to be determined.

Should 49ers insert Trey Lance back in over Jimmy Garoppolo?

Lance’s injury-news update is a notable development. And while there’s a long way to go before concluding whether or not he’ll be healthy enough to play, any return ultimately prompts a very serious question.

Would San Francisco reshift its depth chart once again to make Lance the starter, thereby dropping Jimmy Garoppolo back down to the primary backup?

There are those who feel the 49ers are better equipped to make a deeper playoff run this season with Garoppolo under center as opposed to Lance, and if both Garoppolo and the Niners are playing well between now and any point when Lance is possibly able to return, it’ll certainly be a tough call for Shanahan.

It’s a rare practice for players to lose starting jobs because of injuries, so one might assume Lance would be given his QB1 role back if he’s able to return this season. However, San Francisco fans may recall how, back in 2012, then-starting quarterback Alex Smith ultimately lost his spot on the depth chart to an up-and-coming Colin Kaepernick after Smith suffered a concussion halfway through the season.

Luckily, Shanahan and the 49ers are in no rush to make that decision anytime soon, and there’s still an awfully good chance Lance’s injury keeps him out of the team’s plans for the rest of the season.

Yet it’s good news the young signal-caller might be able to return fully healthy earlier than originally expected.