With the San Francisco 49ers winless after five games — and rarely finding the end zone — many Niner fans are pleading for a quarterback change. When will head coach Kyle Shanahan switch QBs from Brian Hoyer to rookie C.J. Beathard?

When the San Francisco 49ers moved up to draft quarterback C.J. Beathard in the third round of the 2017 NFL Draft, it was a matter of when — and not if — the rookie would start for the 49ers this season.

Now that the 49ers have lost their first five games — three of which without scoring a touchdown — many fans are wondering if the time is now. 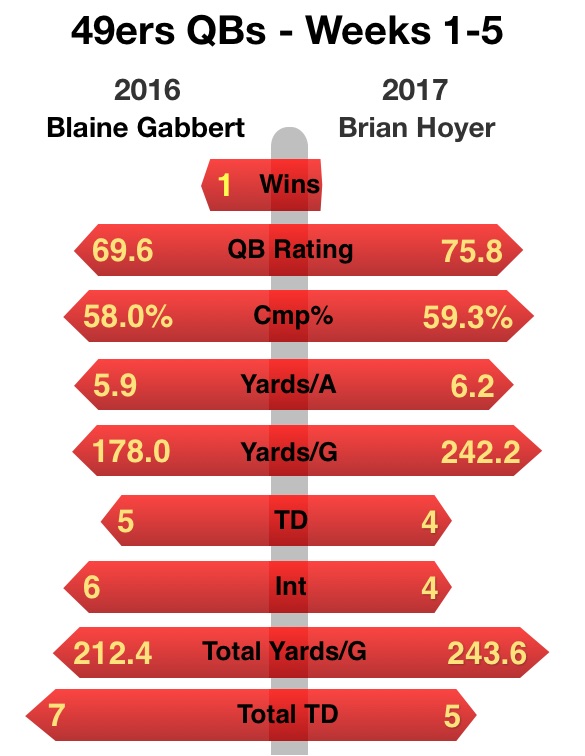 Regardless of fans’ desires, Beathard won’t be the 49ers’ starting quarterback in Washington on Sunday, but barring stark improvement from Hoyer, Beathard will soon get his opportunity to play.

So, when is the best time for Shanahan to insert the rookie into the starting lineup? Let’s take a look at the team’s remaining schedule:

If Hoyer continues his inconsistent level of play, look for Shanahan to make a quarterback switch when the team returns to Levi’s Stadium on November 5. If Hoyer improves his game, Beathard will still get his chance, but he will likely have to wait until December for his first opportunity.

Either way, Shanahan will want to see what he has in Beathard before the team enters free agency and next year’s NFL Draft. Expect Shanahan and general manager John Lynch to ensure they have their franchise quarterback on the San Francisco 49ers roster by the beginning of the 2018 season.